I love reading books about waste, so it should come as no surprise that I recently picked up a copy of Adam Minter’s Junkyard Planet: Travels in the Billion-Dollar Trash Trade at the library. 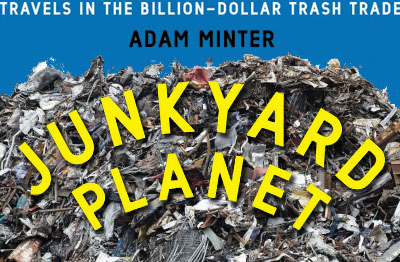 In my head, when I saw the word “junkyard” I was thinking “landfill” but it’s not about that at all. This is about junkyards in the old fashioned sense of the word–junk to someone but valuable resources to someone else–and would be more appropriately named Scrapyard Planet.

The book begins with a bold statement:

[I]f what you toss into your recycling bin can be used in some way, the international scrap recycling business will manage to deliver it to the person or company who can do so most profitably.

The author Minter was raised with a junkyard as the family business and for many years afterwards reported on the scrap business in China, so he may be a bit biased. But he knows his stuff and elaborates on how even something like a broken strand of Christmas lights, which no one here would think of as more than trash, really does have value. In Shinjiao, a.k.a. the Christmas Tree Light Recycling Capital of the World, the copper is extracted from the strands for reuse and even the plastic can be salvaged when it is worth enough. So much depends on the current market.

If you’ve ever wanted to know what happens to your recycling, read this book. It explains why it’s usually cheaper (and possibly greener) to ship recycling to China rather than doing so locally, and also why many Chinese villages are eager for this kind of business despite the inherent health and environmental problems. Plus, there are several happy highlights where what could be recycled is actually salvaged and reused instead, saving the costs of remanufacturing something into the same exact thing.

One of the most shocking parts for me, though, was how cell phones don’t get reused if they’re more than a few years old, even if they’re in good condition. In many cases the chips and other parts can still be salvaged, but no one wants a dated phone these days. It must have been just my wishful thinking that assumed only Americans were like that.

Minter himself realizes that reuse is superior to recycling and not just because you can make more money off of it (although that helps). In the closing section he even goes so far as to promote reducing, the first of the 3 R’s:

Above all, though, I encourage people to think about what it means to recycle, and make smart choices as a consumer before you buy that thing you’ll eventually toss out. Recycling is a morally complicated act.

After reading this, I’m glad I skipped this Christmas lights this year. It would be nice to do something to decorate, but it’ll have to be with materials that are easily reusable or recyclable. Things that I can fix myself if they break. Using your creativity grows your creativity. Although if I come across a soda can laying on the ground, that’s definitely going straight in the bin. Recycled beats new any day.