I was looking at the Extinction Facts campaign today, and no matter how many times I’ve heard it already, it always strikes me the amount of resources that go into meat. 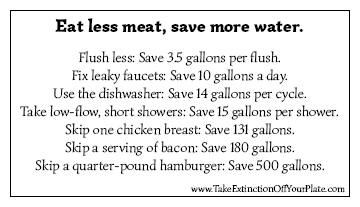 And the really sad part of it is that about 20% of the meat that gets to market doesn’t get eaten. A huge contributor to the following: 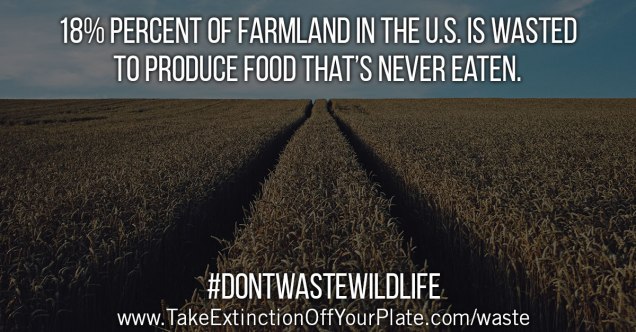 At the start of the year, my husband I decided to drastically cut back on meat and dairy consumption for our health and for the planet. And so far, so good. It’s given us a chance to try new veggies, new fruits, new grains. He’s lost weight. I have more energy. And my favorite part is not having to deal with stinky meat wrappers.

Initially I thought this would just be temporary. I am, after all, a Texan and love some brisket. But amazingly it’s become normal now. We eat meat only a couple of times a week and even then in much smaller portions than previously. Sometimes our normal meals are something as simple as lentils and rice. Or we chop up a variety of veggies to go into our fried rice or vegetarian chili.

My husband is still generally sold on the concept of meat as part of every meal but is more than happy to get some tofu, chickpeas (which to him really do taste like chicken), black bean burgers, TVP (soy shaped like beef crumbles) much of the time. Surprisingly, he also loves the lentils and rice. I wish I had known that back when money was really tight!

If you’re a meat-eater, I’d encourage you to also try going vegan every once in a while and try new foods to see what you like and what you love. If that’s unthinkable, I encourage you to just take your leftovers to go at the restaurant. Even if that means taking home a foam clamshell. Eat them for lunch the next day, or reinvent them into a new food creation. If you buy meat at the supermarket and aren’t going to eat it right away, freeze it until you need it and put it in the fridge to thaw the day before to ensure it doesn’t go bad. And don’t ridicule you’re uncle Harry for gnawing on the chicken leg until every last bit of meat is gone; that’s the way to do it.

With some simple changes, we can make less food go further. We can prevent meat waste and savor every delicious morsel. Apologies to the vegetarians out there, but I still find meat to be truly appetizing and appreciate it even more now that I don’t eat it every day.